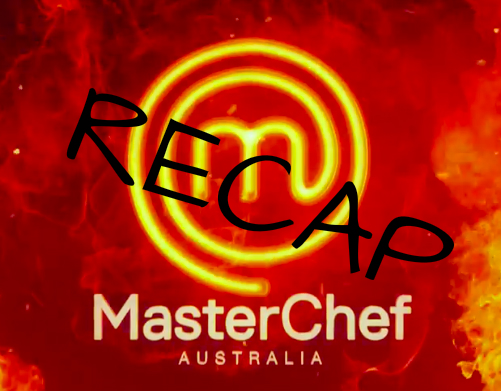 Tonight is the immunity challenge, and Simon, Tessa, Abbey and Ben.

Before the episode starts, I’ve had a hot tip from Embers88, who has found Walleed’s website and instagram. He’s operating his own Middle Eastern dessert and sweet shop, Fresh Prince of Baklava, and I’m so here for it. Honestly, my love for him grows. Thanks for the tip, Embers88!

The episode starts in the MasterChef house, and there is a note in the kitchen, a la the bachelor date style, but sadly no Osher Gunsberg is in sight.

They have to go to their biggest sponsor, the place where Curtis Stone is chained until it’s time for marketing, Coles! There, the contestants have to buy one fresh ingredient.

They come back with their special Aldi Coles bags containing their ingredient.

When the contestants get to the kitchen, Gaz, George, Matt, and Matt Sinclair are waiting for the immunity hopefuls.

They welcome back Tim, who I don’t care for.

Then, it’s time to find out what everyone chose.

Matt tells them they have to choose three of the ingredients to cook with and have sixty minutes. They don’t have to use the one they bought.

Time starts, and the montage begins with the contestants running to the pantry.

Running to the pantry is an honest to god mood. Like, that’s me at 2am suddenly needing to make some Vegemite and cheese crackers. Most relatable part of this show.

Abbey gets so much air time on this show, and honestly she is so annoying. I miss my boy, Walleed.

Can we just take a moment to acknowledge Ben’s shirt?

Time is finally over, and I’m ready to taste.

First up is Ben!

Gaz says the plating has really improved, like something clicked.

The trio of judges and Matt Sinclair remind Abbey to stand by her dish. If something doesn’t work, don’t include it on the plate.

Matt Sinclair says it looks stunning, and different to everyone else’s – full vegetarian.

“I find the beetroot salty,” George says. “The mushrooms are too sweet, it’s a bit all over.”

It’s all about balancing flavours.

Matt likes that it references the original with the yolk in the middle.

“Tastes as good as it looks,” Gaz says. “The little things, like the crispy garlic, make it for me.”

Matt really likes it, and Matt Sinclair calls it a nice, refreshing way to eat a classic dish. George says it’s one of her best this season.

Now, it’s time for the results.

Tessa gets to choose which flavour pair they get to work with. Jesse will find out when his time starts. He’ll have 60 minutes, she’ll have 75, and as usual, it’ll be a blind tasting.

The first is salt and vinegar, and the second is cheese and onion.

It’s a hard choice for Tessa. She has to do a dish that captures the pair perfectly. She decides on cheese and onion.

The trio leave, and Matt starts his mentoring, working with Tessa to get a dish going. Montage begins.

Finally, time is up, and it’s time to taste.

Up first is Jesse’s dish.

The trio of judges try it.

Gaz says it’s missing a depth of flavour that the onion soup does.

“It’s not got that, BANG, of flavour,” George says.

They score the dish, and then it’s time for Tessa’s.

From the second it comes out, they trio LOVE the look. When they eat it, they love everything about it. Matt calls it a cracking dish, and I’d be surprised if Tessa doesn’t win.

Jesse revealed he cooked the soup, and he’s scored first.

So that means Tessa’s won the immunity pin. Matt Sinclair runs over and hugs her. This is the second pin Tessa has won this season, but she had used her pin already.

They thank Jesse for coming out, and then it’s all done and dusted for the day.

As usual, I wrote this as I watched the episode, so there is spelling and grammar issues.

To watch this episode and catch up on this season’s MasterChef, head over to southhemitv.com.

If you’re up to date on MasterChef but want to read more recaps, The Super Switch started tonight, and the recap’s over here!